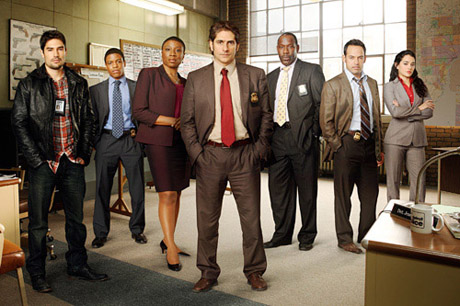 ABC is today announcing its Fall schedule at its annual upfront presentation in Los Angeles. Ten new shows are being announced, with seven already having slots on the Fall schedule.

On Mondays, Dancing with the Stars at 8:pm is paired with Castle at 10:pm.

Tuesdays boasts two new dramas. No Ordinary Family airs at 8:pm; the family-friendly hour-long is about an average family who are suddenly given superpowers. The Dancing with the Stars Results Show airs at 9:pm, followed by new procedural Detroit 1-8-7 (pictured above), a faux-documentary about cops on the toughest streets in America.

Wednesday is still ABC’s big comedy night, with The Middle kicking off the evening at 8:pm, followed by new romantic comedy Better Together. Modern Family and Cougar Town air in the 9:pm hour, followed by the new legal drama The Whole Truth, which is built around an intriguing premise where point-of-view is constantly shifted to provide new insights on the goings-on. (Sounds kind of like that movie Vantage Point.)

Thursday is all about drama, with the new My Generation airing at 8:pm, which charts the lives of high school friends ten years after graduation. Grey’s Anatomy and Private Practice round out the night.

Friday kicks off with the new reality show Secret Millionaire, which is sort of like Undercover Boss, with the ultra-rich living on minimum wage to see how the other half lives. New medical drama Body of Proof follows at 9:pm, with 20/20 retaining its longtime timeslot at 10:pm.

Waiting as midseason replacements are comedies Happy Endings, Mr. Sunshine, the new Shonda Rhimes medical drama Off the Map, and the just-renewed V.