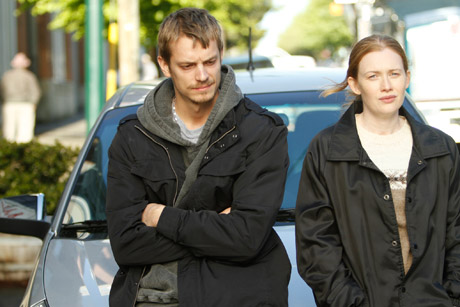 After their successes with Mad Men, Breaking Bad, Rubicon, and the strong buzz surrounding the upcoming The Walking Dead, AMC has jumped at the chance to order their fifth original series. Quickly becoming a home for high-quality storytelling, AMC has greenlit a full, 13-episode order for the first season of a new untitled series from writer and executive producer Veena Sud of Cold Case.

Formerly titled The Killing, the serialized drama ties together three distinct storylines that revolve around the murder of a young girl in Seattle. The three storylines follow the detectives assigned to the case, the grieving family of the victim, and the murder suspects. AMC says that the story also explores local politics as it follows politicians connected to the case. Over time, it will become clear that there are no accidents, that everyone has a secret, and while these characters think they’ve moved on, their past isn’t finished with them yet.

The series stars Mireille Enos (pictured above) as the lead homicide detective investigating the murder, Billy Campbell as Seattle’s City Council President; Michelle Forbes as the victim’s mother; Joel Kinnaman (also pictured) as an ex-narc cop who joins the homicide division, and Brent Sexton as the victims father.

The untitled series is based on a Danish TV series called Forbrydelsen that’s hugely successful overseas. Director Patty Jenkins (Monster) is helming the pilot that’s slated to premiere sometime in 2011.