You are here: Home / Announcements / Conan & Foursquare Team Up With Flying Blimp 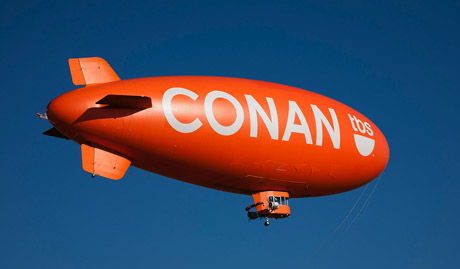 We are just weeks away from Conan O’Brien‘s return to late night television with his new show on TBS, which debuts November 8th. Team Coco and Foursquare have teamed up to create an eye-catching promotion that will build excitement for the new show: a blimp.

The huge, orange blimp is flying over the east coast during October, and fans are encouraged to check in with Foursquare when they see it in person, which unlocks a special “Conan Blimp” badge created just for this promotion. You can track its movements via a live map and blimpcam at the Conan Blimp website, or follow its updates on Twitter.