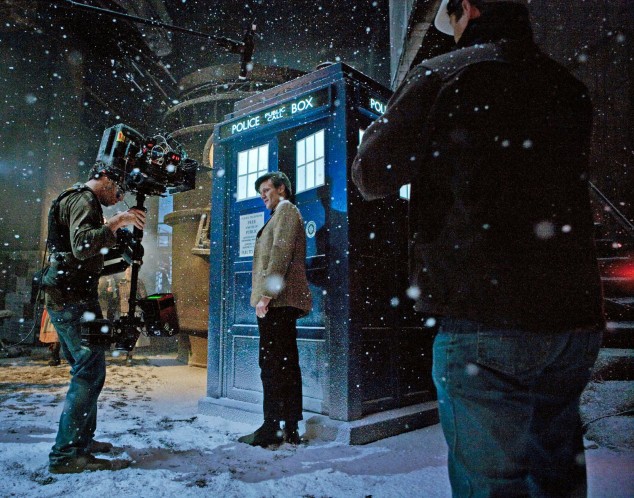 Inspired by Charles Dickens, the episode is titled “A Christmas Carol” and written by showrunner Steven Moffat. Moffat describes the episode:

“Oh, we’re going for broke with this one. It’s all your favorite Christmas movies at once, in an hour, with monsters. And the Doctor. And a honeymoon. And… oh, you’ll see. I’ve honestly never been so excited about writing anything. I was laughing madly as I typed along to Christmas songs in April. My neighbors loved it so much they all moved away and set up a website demanding my execution. But I’m fairly sure they did it ironically.”

The Doctor’s current companions Amy Pond and Rory Williams are onboard for the adventure, along with special guest stars Michael Gambon and Katherine Jenkins.

Christmas Day will also be the premiere of the “Doctor Who Prom,” a live concert featuring Matt Smith (the Doctor), Karen Gillan (Amy Pond), and Arthur Darvill (Rory Williams) as hosts. The Prom was filmed earlier this year at Royal Albert Hall and includes appearances by the Weeping Angels, the Daleks, and the TARDIS. The BBC National Orchestra of Wales, which records the soundtrack for the series, will perform Murray Gold’s music from the TV show as well as a selection of classical favorites. No exact details have been released on when the Doctor Who Prom will air.

Doctor Who is currently filming its sixth season premiere in Utah — the first time the show has ever filmed in the United States — for a story set in the late ‘60s. Smith, Gillan, Darvill, Alex Kingston (River Song), and guest star Mark Sheppard are involved in the location shoot. Season Six premieres in Spring of 2011.