You are here: Home / Announcements / First Look at AMC’s ‘The Killing’ 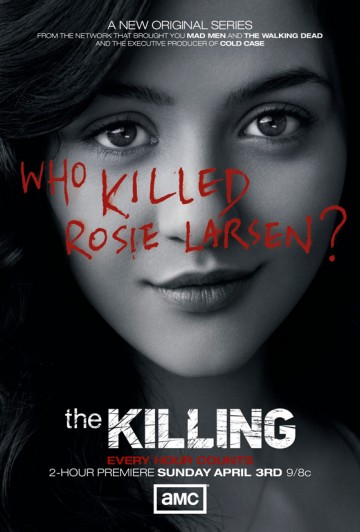 Riding high on the success of The Walking Dead, AMC’s marketing department has kicked into high gear for its next new drama, The Killing, which is actually an American remake of a Danish hit called Forbrydelsen (which literally translates as “crime”). The Seattle-set series follows the murder investigation of a girl named Rosie Larsen from three different perspectives.

The detectives assigned to the case comprise one perspective, the victim’s grieving family is another, and the third is made up of the suspects. The twist-filled story is layered with secrets on top of secrets, most of which come from local Seattle politicians, with much more at stake in Rosie’s murder than it initially appears. Mireille Enos stars as Sarah, the lead homicide detective investigating Rosie’s death. Joining her are Billy Campbell, Michelle Forbes, Joel Kinnaman, and Brent Sexton.

The Killing debuts with a 2-hour premiere on Sunday, April 3rd. AMC clearly has high hopes for this one, having given the series a 13-episode first season order.

EW.com got the exclusive on the series’ movie-style poster, which you can view above. A pair of trailers for the show are below.