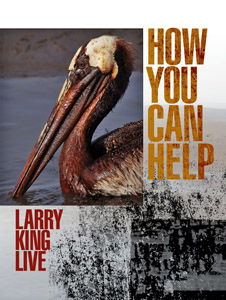 As the catastrophic oil spill in the Gulf of Mexico enters its 63rd day, CNN has announced that Larry King will be holding a mini-telethon to benefit those whose lives have been impacted by the spill, as well as animals who have been contaminated by the oil. The telethon will also raise awareness of the things people can do to help.

Airing on CNN tonight at 8:pm EST, King’s special two-hour edition of Larry King Live will feature appearances by Justin Bieber, Cameron Diaz, Robert Redford, Kathy Griffin, and Sting, who is expected to perform. Each guest will sit at phone banks taking calls and donations, which will go to the efforts of the United Way, the National Wildlife Federation, and the Nature Conservancy.

A second part of the telethon takes place online, where viewers will be able to sign into social networks like Facebook and Twitter, to participate in a special “Social Suite” hosted by Ryan Seacrest.