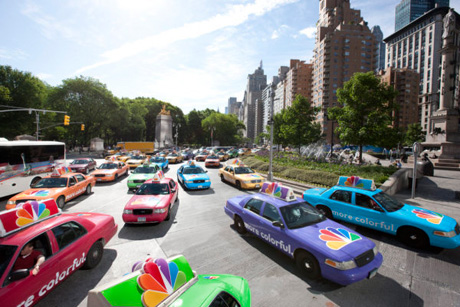 Later today, NBC will be holding its “upfront presentation,” detailing its new Fall schedule. (The photo above is from a promotional stunt staged to celebrate the new season.) Here’s what Fall going to look like on the peacock.

On Monday, Chuck will return for its fourth season at 8:pm, followed by new mystery/thriller The Event at 9:pm, and Chase, the new Jerry Bruckheimer procedural about federal marshals, at 10:pm.

Tuesdays are dominated by a 2-hour block of The Biggest Loser at 8:pm. Parenthood returns for its second season at 10:pm.

Wednesdays is where you’ll find the buzz-worthy new JJ Abrams show, Undercovers, at 8:pm, about a husband and wife who work together as spies. 9:pm is home to Law & Order: Special Victims Unit, followed by the new Law & Order: Los Angeles at 10:pm.

Thursday is NBC’s big all-night comedy block, starting with four half-hours of Community, 30 Rock, The Office, and new comedy Outsourced, about an American who’s sent to India to run a new branch of his company. The new hour-long dramedy Love Bites airs in ER‘s old time slot at 10:pm.

Friday has only one scripted hour, at 10:pm, where you’ll find the new drama Outlaws. Preceding Outlaws is reality show School Pride (basically Extreme Home Makeover for dilapidated schools) at 8:pm, followed by Dateline at 9:pm.

Saturdays remain an open night of programming that rotates between movies, specials, and repeats of shows from earlier in the week, while Sunday is home to Sunday Night Football until March.

Parks & Recreation, despite having no spot on the Fall schedule, has not been canceled. NBC is holding onto it for a planned mid-season return.