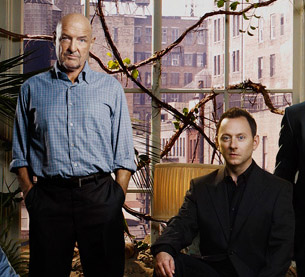 Man, J.J. Abrams has been busy this pickup season. He’s already got pilot commitments for Alcatraz at Fox and Person of Interest at CBS, and now he’s got yet another new show in the works, this time for NBC.

When Lost, which was co-created by Abrams, ended earlier this year, co-stars Terry O’Quinn and Michael Emerson frequently joked that they’d love to find a new show that they could star in together. Their characters frequently shared screen time on Lost, chewing scenery and playing off one another like the master thespians they are. Both actors even scored multiple Best Supporting Actor nods at the Emmys — winning one each.

At least one person took their jokes seriously, and fortunately for fans, that someone had the power to do something about it. NBC has given a pilot order to Emerson and O’Quinn’s proposed show — although there was reportedly strong interest in the concept from both Fox and ABC (which aired Lost) — and J.J. Abrams is lending it the clout of his Bad Robot Productions. (It should make a good partner for Abrams’ other spy show on NBC, the just-starting Undercovers.) It was originally known as Odd Jobs, but apparently that title has been abandoned. What is known is that the show would feature the two actors as ex-Black-Ops agents (shades of Burn Notice?), which is a brilliant concept for these two actors.

Frequent Abrams collaborators Josh Appelbaum and Andre Nemec — both of whom worked on Alias — will write and oversee the show.

This has to be some of the coolest news I’ve reported in a long time. But does anybody else find it odd that every major broadcast network is airing Abrams shows, except for ABC, which had his first two major cult hits (Alias and Lost)? ABC literally launched Abrams’ uber-career, yet his new shows keep winding up elsewhere.