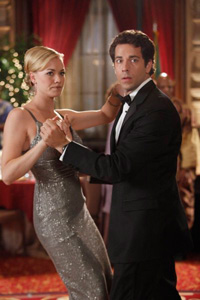 Chuck is looking pretty good for a fourth-season renewal, according to industry scuttlebutt, but the shows biggest fans aren’t taking any chances. The same group of fans that organized the Subway sandwich viral campaign that gave the show its third season are organizing gatherings in major cities to show their support.

Chicago, Seattle, and San Diego will host “flash mobs” of fans dressed up in “Buy More”-style clothing (short-sleeve white dress shirts, grey ties, name tags) around lunchtime this Monday. A fourth flash mob was planned for Philadelphia but has since been canceled, due to the Philly Parks & Recreation Dept. refusing to allow fans to rally there. The goal of these rallies is to convince new viewers to tune in to the show.

Though Chuck has yet to break through to “ratings hit” status, it’s been NBC’s best-rated show on Monday nights since it returned as a mid-season replacement earlier this year. The show saw a creative resurgence this year, thanks to the title character taking on a more physically active role in the weekly capers.

Here’s the when and where, to join in at the events:

Chicago
Millennium Park by the Bean
Meet at 12:15PM Central

Seattle
Seattle Center in front of the Space Needle
Meet at 12:15PM Pacific