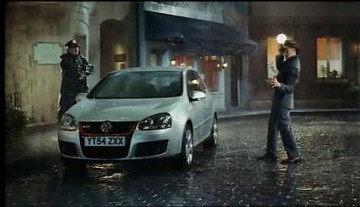 It is hard to stand out among others nowadays when it comes to advertising and the motoring industry is one that it is highly competitive. In order to succeed in this specific sector you can’t get away with just driving the car round a sexy backdrop anymore, you have to do something that makes people think “wow, did that really just happen”? Here are some of the car adverts that have gotten the world talking.

Golf- Singing In the Rain

The reason this is such a fantastic advert and why it changed advertising forever is simply because of the controversy behind it. Half of the people that saw this advert thought it was a terrible crime against the great Gene Kelly whilst others thought it was a great bit of advertising and went out to buy a VW Golf!

Perhaps the reason why this changed the way people thought about advertising was simply because Volkswagen thought outside of the box and managed to put serious budget in putting Gene Kelly’s face onto modern dancers in the video, some of the moves they do are awesome!

This advert might not be a revolution in computer technology like the singing in the rain video but what it does show is how a simple idea first shown off in classic cartoons such as Tom & Jerry, can turn into something real using car parts from the car itself! This ingenious advert not only contributed to the fact that Honda had its most successful year ever when the advert was released but Honda also sold thousands of DVDs of the advert too!

The great Skoda bake off is another example of sheer brilliance in advertising and it was completely crafted to make people see the Skoda brand and assume the Skoda Fabia is a classic car (this is helped a lot by the Julie Andrews song). If you don’t think that this did much to change advertising then consider the fact it took eight people over 10 days to make the car.

The car itself was made up of sponges, rice krispies, glacier mints, jelly and marzipan and was rumoured to cost over half a million pounds to make!

If you still don’t think that these three ads have shaped the way you see car adverts nowadays then take a look at what they come up with now, a lot of it is based on the above three. It is incredibly tough to make a successful advert so hat’s off to these!

Ryan works with contract purchase companyhttp://www.nationwidevehiclecontracts.co.uk/contract-purchase.htmNationwide Vehicle Contracts and is a big fan of awesome television adverts. He would rather you didn’t mention anoying opera singing comparison sites though!