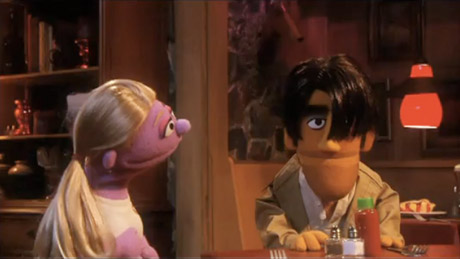 Is today April Fool’s and nobody told me?

This has been a crazy week for Sesame Street. I’m sure you’ve heard by now about the already-infamous Katy Perry music video with Elmo that the show pulled from its upcoming 41st season due to parental outcry over Perry’s cleavage-showing outfit. (Personally, I think Sesame Street couldn’t have come up with a better publicity stunt if they’d tried — more people have already watched the Perry/Elmo vid on YouTube than would have seen it on PBS anyway.)

Then I heard that one of Sesame Street‘s infamous muppet parody segments this season is set to be a take off of True Blood. The segment in question is called “True Mud,” and you can already watch it online here.

Now, today the New York Post is reporting that PBS is creating a new show for Baby Boomer adults, called Next Avenue. The idea is that the show will function as a “virtual life coach” for Baby Boomers, teaching them how to live now that they’ve passed 45. The production already has $5 million in grant money for the series, which arrives this Spring.

Oh. My. Lord. Has it really come to this? Does the world really need the people who gave us Elmo and the Cookie Monster to show middle-aged adults what to do with their lives?