You are here: Home / In Development / Tackiest. News. Ever. 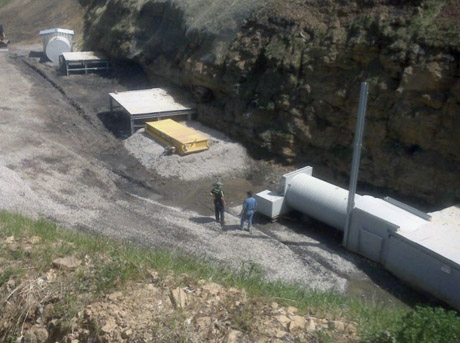 Spike TV is working on a show that takes the reality format of Deadliest Catch and applies it to coal miners in West Virginia. Coal, from the producers of the aforementioned fishing show, will follow the co-owners of Cobalt Mine in Westchester, WV (pictured above), and their employees and the families of everyone connected to the business.

There’s so much wrong with this, I don’t know where to start.

First of all, the Worst Timing Ever Award goes to Spike, for breaking this news the day after the Chilean Miners were rescued. I don’t care if the show has been in development for a year. Piggybacking this announcement on top of this global celebration over the rescued miners is just plain evil. Why not wait a few weeks until the Chilean focus has died down, Spike? The interest level would still be there, and you wouldn’t look like a bunch of heartless heels.

Secondly, I cannot comprehend the public’s morbid fascination with shows like Deadliest Catch, where viewers are granted a voyeuristic look inside the most life-threatening jobs in the world. I mean, I get it; the “unable to turn away” principle is what fuels these kinds of shows, the same way that one slows down and gawks on the highway when nearing a wreck. And Catch is hardly the only one of its kind — the show’s producer Thom Beers has made a career out of producing this sort of thing, with other titles to his credit that include Ice Road Truckers, Ax Men, Lobstermen, etc. Beers’ Original Productions may claim that these shows are about documenting the hazardous work that these people undertake every day, and I don’t deny that these are brave men and women doing these dangerous jobs. But if it wasn’t profitable to make these shows, Original Prods wouldn’t bother. There’s a difference between teaching viewers about a dangerous profession and exploiting those dangers to create entertaining television.

Anyway… if it’s your cup of tea, Coal will premiere next April on Spike with ten episodes planned for the first season.