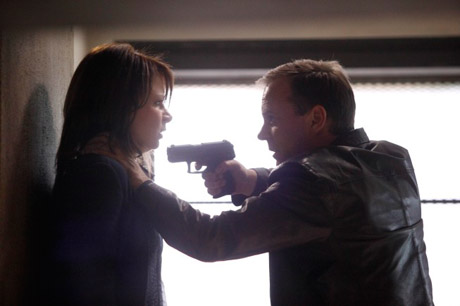 Two major genre shows have just had back-to-back series finales, wrapping up years of storylines. I’m talking of course about Lost (on Sunday night) and 24 (just last night, pictured above). Which one was the more satisfying end?

Both focused more on emotional resolutions, with a healthy serving of climactic action on the side. Both featured beloved characters saying their final goodbyes. And both had plenty of life and death on display.

Lost wrapped up its story with a long-planned ending that put a definitive cap on this big, mythological saga. 24 left room open for a big-screen film that’s already in the works. It’s a common writer’s adage that you “always leave them wanting more,” because that way they’re always left with positive feelings about what they saw.

The two finales are apples and oranges, but I’m curious… Which one did you like better? Or maybe a more pertinent question would be… which show will you miss more?