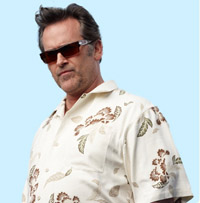 News straight from Comic-Con: USA network chief Jeff Wachtel announced in front of a packed room of fans that a prequel film is in the works for Burn Notice. Said telefilm would star the show’s resident ex-Navy SEAL, Sam Axe, played by Comic-Con favorite Bruce Campbell.

According to Mo Ryan of the Chicago Tribune, the two-hour movie will not substitute for two episodes of the show, but will instead be a full movie focused solely on Sam. The movie is set in South America during Sam’s days as a SEAL, and will tell the story of how he ended up retired in Miami.

No air date has been set, as production has not yet begun.