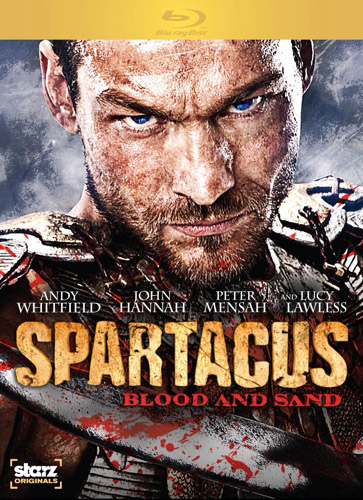 The historic, real-life tale of Spartacus is not new to Hollywood. But neither history nor Hollywood have ever seen anything quite like Starz’ Spartacus: Blood & Sand. It is something wholly new, using bits of other well-known formulas in creative and clever new ways that adds up to something far greater than the sum of its parts. At times stubbornly beholden to history, and at others wildly veering from it, Spartacus nonetheless introduces us to the familiar slave who eventually rose to lead an incredible rebellion against the Roman Empire. 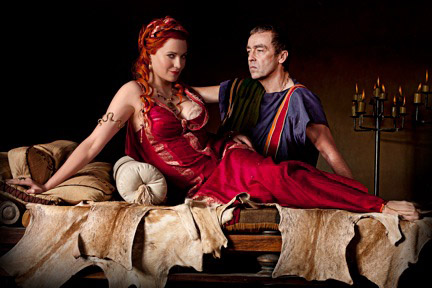 I was not able to watch the show when it first aired, so my experiences with the Blu-ray are reflective of back-to-back viewings over the course of several days (instead of the months that Starz fans had to wait for the story to unfold). I point this out because I believe it’s significant; the passage of time very much plays a part in how a TV series is received, particularly one with serialized storylines. Seen back-to-back in hours-long sittings, it’s entirely watchable and easy to connect the dots. But when stretched out over longer periods of time, the mind has greater expanses in which to digest and absorb a given week’s episode, and discuss it with friends. This sort of pondering and community interaction is entirely lost when watching the whole thing alone on a set of discs. 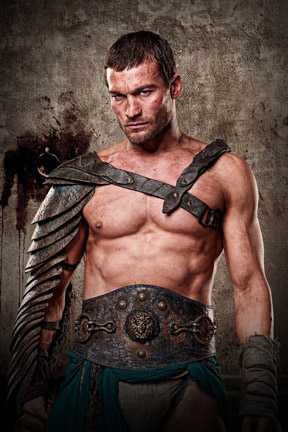 Spartacus: Blood & Sand casts Spartacus (a smoldering role that Andy Whitfield grows into every bit as much as his character) in his earliest days — even starting off before he became a slave at all — to show us a new side and new motivations for why he becomes the hero of the people. Spartacus is a married Thracian who wants to live in peace in the arms of his wife, Sura. But his world is altered when his people agree to a bargain with Roman soldiers to work together to defend both Rome and their own Thracian homes. When the Thracians are double-crossed by some very bad decision-making, Spartacus leads his men to slaughter their Roman masters so they can protect their own homes. But it isn’t long before more Romans come looking for Spartacus, and he’s soon carted off into slavery, where he eventually catches the eye of a cunning businessman and gladiator owner named Batiatus (John Hannah). Spartacus soon winds up as a member of Batiatus’ gladiator school — a harsh environment where he’s forced to fight against his will. 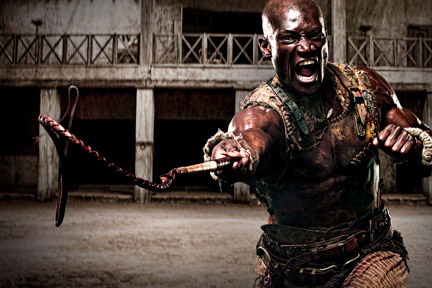 If some of this sounds familiar, it is. The description “Gladiator meets 300” has been tossed around many times, and for good reason. Spartacus uses major elements of both. Yet if you’re willing to stick with it, you will find that the show is so much more.

Some of the ingredients that go into making this intoxicating concoction? How about a perversion of the standard class-based society where life, sex, and everything in between are the exclusive play things of the rich and entitled. Batiatus’ ludus (gladiator school) is home to some of the most conniving, cutthroat characters you’ll ever meet, all of whom are interested in looking out for number one and not much else. The show strives to create a graphic novel-like feel, using color gradation and stylistic splashes of blood to convey the moods and mindsets of the characters. (This effect is used heavy-handedly in the early episodes, but wisely scaled back towards the end.) The characters speak in an almost Shakespearean dialect that has a beauty all its own. And then there’s the brilliant cast that also includes Lucy Lawless, Peter Mensah, Manu Bennett, Craig Parker (Haldir the Elf warrior from Lord of the Rings), and many more. 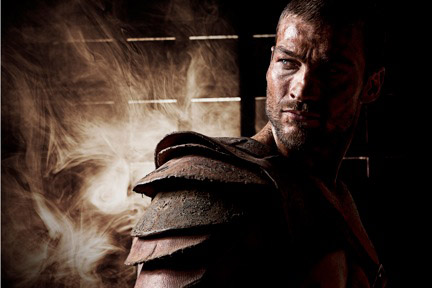 It’s ultimately the characters of Spartacus: Blood & Sand that make the show so worth watching, but by the end of this first season’s run, you’ll discover that it is, in fact, a plot-driven narrative, having been building up to a major turning point all along. The season tells a single, over-arcing storyline across 12 tightly-woven episodes filled with one twist after another, and while it starts on shaky ground, its quality grows stronger with each passing episode until it culminates in a shocking, cathartic finale that demands conversation. The final episode, “Kill Them All,” is absolutely as good as television ever gets, brilliantly conceived and confidently executed.

Although it is not Erati’s purpose to provide content guidelines for viewers, I feel I must offer a warning: this Spartacus is most decidedly not for everyone. I wouldn’t offer it to anyone under the age of 21, and even many adults simply will not be compatible with it. It’s profane in the extreme, using both familiar words such as the F-bomb (which gets extremely frequent screentime), as well as made-up curses that fit with the show’s formal dialect. The show also has nudity and sexual content that at times borders on pornographic, and at others jumps over that border and never looks back. In addition, the fights in the arena are often filled with gushing blood and severed appendages, which the show never shies away from showing in all their gory glory. A few memorable instances even showed CGI organs spilling out of the deep cuts inflicted in the arena. 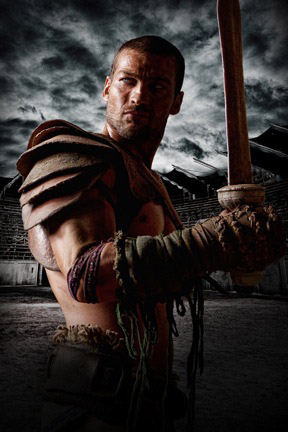 The Season One Blu-ray offers all 12 episodes in crystal clear quality, with a gorgeous transfer and tremendous sound. There are extras a-plenty, including extended running times for several episodes, a number of episode commentaries from cast and crew, and the standard making-of documentaries that show how the series is made.

Spartacus: Blood & Sand has been the recipient of a lot of hype in the last few years, and after watching Season One in its entirety, I completely understand why. It’s one of the most original TV shows to come along in years, and it’s brilliantly done.