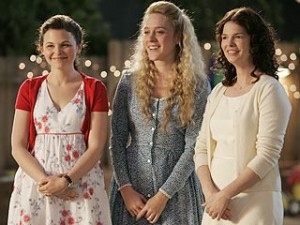 With the current controversy on the polygamous cult in Texas it was is inevitable that Big Love celebrities were asked to comment on the issue. The show does raise important ethical themes or psychological repercussions, but Ginnifer Goodwin (who plays one of Bill Paxton’s three wives) says their version is “sugar-coated.”