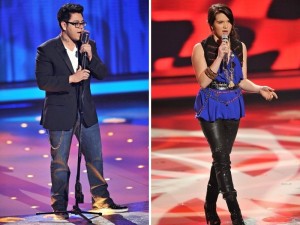 The other night I didn’t get to write about American Idol‘s “Elvis Week” since I was a bit more excited about the next show – Glee. However, tonight was eliminations night. After Michael Lynch was saved the previous week by the judges it meant that this week will be goodbye for two contestants. It also meant that since the “save” had already been used then the contestants would have no chance of staying at all.

The night started off with a pretty quick with an an elimination announced within the first 15 minutes. Andrew Garcia was the first to go. I can’t say that I am surprised considering how much he’d been struggling since it was narrowed down to the top 12. It still made me really sad though because I’m still a fan of Andrew. The judges may be really annoying after repeating themselves for the millionth time but we have to agree that his version of “Straight Up” back in Hollywood week is plain genius. Good luck to Andrew!

The other contestant that got the boot was Katie Stevens. I did enjoy her performance (though Simon found it annoying) and we have to give her props because week after week she really is looking younger and getting more comfortable up there. I do think that it was her time to go because, let’s just face it, she’s got the pipes but she needs to mature more.

Adam ended the night with a bang. As usual great performance. Very theatrical and to-die-for vocals.