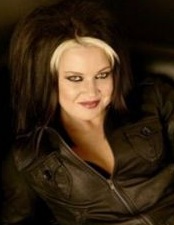 American Idol fans voted off Amanda Overymyer, the rocker with the wild hair and (according to Ryan Seacrest) one of the most “fearless” contestants the show ever had. However, Simon Cowell said that he agreed with the choice. He had criticized Overmyer for either being “too predictable” or “being too over-the-top.” (So which is it, Simon?)