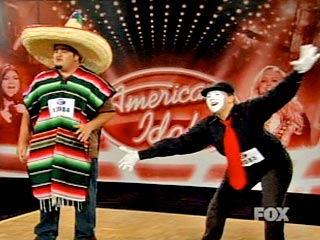 Here are the numbers of the Dallas audition of American Idol.

18 mentions of Kelly Clarkson, who first auditioned in Dallas
24 contestants were heard singing Clarkson’s “Since U Been Gone”
5 mentions of Carrie Underwood, who sings country music
15 farm animals appeared onscreen
12 cowboy hats appeared onscreen
24 golden tickets to Hollywood were handed out
1 cowboy named Drew Poppelreiter from Saltillo, Miss., got one of them

Watch the highlights from crazy mime acts to hippies who clearly haven’t seen a hairdresser (or a nailcutter) in the last 5 years.