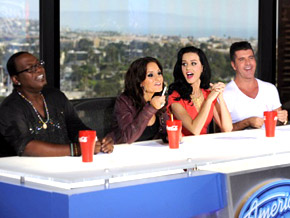 Got my American Idol fix for the week and all I can say is that yesterday’s auditions was much more interesting than tonight. Granted that Avril Lavigne contributed nothing except for a few giggles and not too constructive criticisms, and Katy Perry was a bit too bitchy; I still found last night more enjoyable simply because there was more talent in the LA auditions compared to Dallas. Dallas was plain boring with the high point being the ex-Barney girl turned Simon’s fantasy and the girl who beat leukemia.

Now the funny thing is that although Katy Perry grated on my nerves by the end of last night’s episode and I’m sure I liked more contestants in those auditions all I can remember is her saying she wants to throw coke on Kara’s face and saying something like they’re not trying to make a “movie story”. Looking back at Victoria Beckham’s guest judging stint, which I missed but saw on TiVo (Yay for TiVo!), I can’t agree more when she said that being polite is good. Katy could use help from Victoria. On the other hand, I guess people would call Victoria boring but all I can say was the she was “nice”.

Hopefully next week’s auditions will be better. Better judges and better contestants – both in terms of talent and quirky entertainment value.