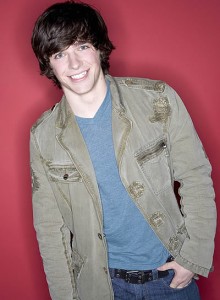 I’ve often wondered why they have to boot someone out during the “Idol Gives Back” episode. With the good cheer going all around as people focus more on charity it just seems pretty sucky to try to wipe the smile off someone’s face. Keeping a smile on is not a problem to the one who had to leave this time though because Tim Urban had been getting comments from Simon for being too smiley.

Tim Urban has been having a rough time (more like a roller coaster ride) during his stay on idol but even after really rough performances, as Simon said, he didn’t really have to worry because his fans would carry him through. It seemed that his jolly demeanor will take him through to the ended, but of course it did not. I guess his “Better Days” (pun intended of course!) with idol is finally over, no thanks to his rendition of the Goo Goo Doll’s song. On the bottom three this week with Tim were Casey James (first time for him) and Aaron Kelly.

Towards the end of the show, after George Lopez revealed who was going home, the remaining idols surrounded Tim, who wasn’t asked to sing anymore. Probably it was because the 2-hour Idol Gives Back was already running too long, and anyway the save had already been used up before.

Next week we’ll be seeing Shania Twain mentor the idol contestants. Too bad for John Parks he didn’t make it this far…