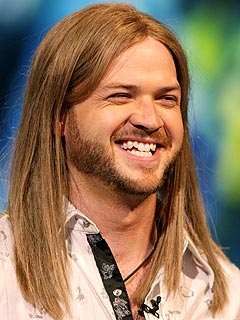 No, he’s not wearing a wig. And yes, he dated Britney Spears. (She was always real down to earth. She’s a really good girl.”)

Robbie Carrico — who just recently got kicked off American Idol, isn’t someone to hide the truth. Even if Simon Cowell did accuse him of not being “authentic.”

Though he calls himself a rocker, Robbie was haunted by his past as a member of the boyband
Boyz N Girlz United. People just couldn’t shake off the feeling that he didn’t have that “edginess.” He says, “I am what I am.”

But right now what he is is an out-of-work musician. Robbie’s not worried, though. “I’ve had some offers,” he said.