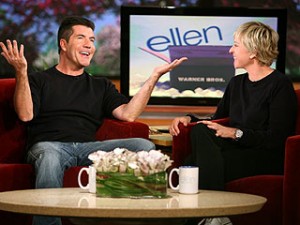 Simon Cowell actually seemed charming and (gasp!) humane when he appeared on Ellen Degeneres’ show. She showed him a reel of his harshest critiques from American Idol (with winning lines like “You sounded like Dolly Parton on helium” and “It was a bit like ordering a hamburger and only getting a bun.” He actually was a bit ashamed of himself. “That was like slightly, harshly edited there,” but conceded, “I must admit watching myself back I hated myself.”

But in his defense, he said: “This is just the way the music business is. When you’re performing in front of 25 to 30 million people and you’re not making the effort to make your self into a star I don’t think you’re doing yourself any favors so that’s why I said it.”

Both Ellen and Simon made a bold prediction: David Cook will take the Idol crown. “I’m gonna call it for David Cook,” Cowell said.