I have always wondered why the Real Housewives of New York had a single girl as part of the main cast. Whatever the reason was the uber strong (referring to personality here) Bethenny Frankel is now a real wife after getting married two days ago. March 28 saw her fellow cast members Ramona and Alex McCord at the event. 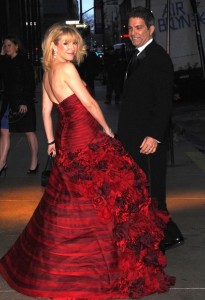 Ramona posted in her blog that “It was probably one of the nicest weddings I’ve ever been to.” All I can say is that her dress is one of the nicest I’ve seen in a while! And for that I’m posting a picture of her instead of Bethenny here!

The decision to get married was obviously not a snap decision (like Lamar and Khloe’s was) especially since Bethenney has been pregnant for the last 7 months. I guess she finally realized after all those months that she has it in her to be a housewife if she has it in her to be a mom. It also doesn’t hurt that she now has her own show (a spin off of the Real Housewives), Bethenny’s Getting Married. The show will of course still be under Bravo though the exact air date is still not announced.

Good luck to Bethenny and Jason. Hopefully the toll of being on a reality TV show won’t take too much of a toll on their marriage.