You are here: Home / TV Series / Reality Shows / Dancing With the Stars / Are you ready for the Dancing with the Stars finale? 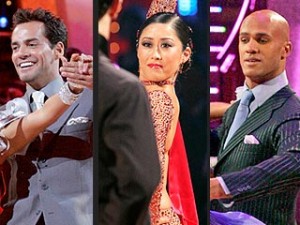 In mere hours, Dancing with the Stars will begin its two-part season finale (watch for it on ABC, Monday at 8 p.m., EST and Tuesday at 9 p.m., EST).

Who are you placing bets on? Will Olympic skater Kristi Yamaguchi add this gold medal to her collection of trophies, or will NFL star Jason Taylor make the winning kick (…and swing…and swirl…) Others are rooting for Cristian de la Fuente, who made a comeback after injuring his left bicep several weeks ago.

Reports say the couples practice ten or more hours a day. Hopefully, it’s worth it. (Tip: no doll costumes, please!)