You are here: Home / TV Series / Reality Shows / Dancing With the Stars / “Chucked” Out of DWTS 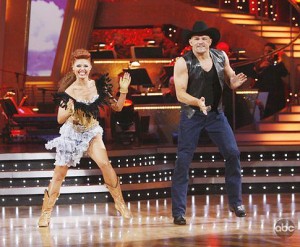 Chuck “Iceman” Liddell was finally chucked out of “Dancing with the Stars” along with professional dance partner Anna Trebunskaya.

Mixed martial artist Chuck Liddell appeared to be comfortable dancing the two-step in his jeans and leather vest. In fact Liddell’s performance this week was by far his best but though he (as usual) got praise from the judges for his hard work and ability to even dance at all, the low scores they gave combined with low viewer votes meant that he had to go home.

As judge Len Goodman said, “There’s a novelty value about you because you don’t expect you to be able to dance and so that’s good. But eventually you’ve got to come down to the fact that this is a dance competition and your quality of dancing isn’t there.”

Despite being booted off the show, Liddell’s partner remains proud of him saying that Liddell made her proud each week and that she loved working with her “bear and hippo”.

Other highlights of the last DWTS episode includes Mya and Melissa Joan Hart’s great scores, which I think they really deserved. Of course any Shakira performance is a treat so her appearance (she performed “ Hips Don’t Lie” and “Did it Again” )is another highlight for me.

Next week we’ll be seeing the last 10 pairs dance the Argentine tango and the paso doble. They will also be performing the hustle as a group.