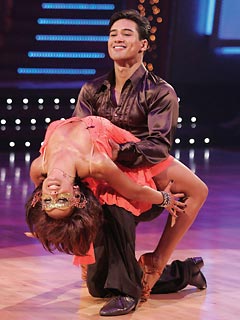 Is it just us, but don’t you think the Dancing with the Stars finale fell way, way below expectations? It was such an exciting season with arguably one of the best collection of talent, but suddenly everyone just lost their mojo — not to mention their fashion taste. Marie Osmond’s costume looked like it was designed by Charlie Brown; her second outfit (a baby doll dress) was as weird as the odd, jerky movements she’d incorporated in the choreography (“It’s Baby Jane meets the bride of Chucky,” said Tonioli.) Melanie Brown was blah, and Juliane and Helio’s footwork was lousy. (The gold jumpsuit also made him look like a Brazilian Power Ranger, observed Tom Bergeron.)