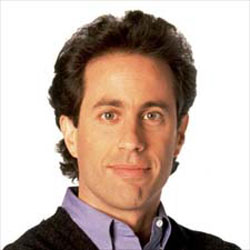 Jerry Seinfeld is raring to get back on TV again but this time it would be behind the screen as the producer of a reality series called “Marriage Ref”. The series was Jerry’s idea. According to NBC exec Ben Silverman, “”Jerry called us up and told us he had an idea. He flew in to sit down with us. We were laughing the whole time. As Jerry noted, some of the greatest comedies in history have been about marriage.”

The show seems like the usual couples therapy show with celebs, comedians, and sports stars giving their very frank opinions to “help” couples resolve marital disputes. Though resolving issues is one of the points according to Jerry Seinfeld it is not. He says that, “This is not a therapy show, it’s a comedy show. After nine years of marriage, I have discovered that the comedic potential of this subject is quite rich.”
The new reality series is set to make its debut this fall. NBC has so far ordered six episodes and will wait and see how well received it will be.

As for the chances of seeing the actor on the screen of his reality show it is said that the chances are quite good, after all the show will require celebrity guests and Jerry Seinfeld IS a celebrity.