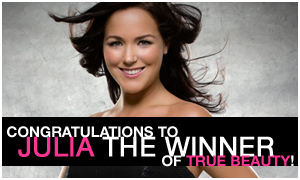 Before the True Beauty big reveal all the contestants went on the Tyra Show to do “random acts of kindness”, which weren’t random at all considering the fact that the Tyra show made them do it! In my opinion team 1 and 2 did pretty well in entertaining the old folks and helping out in the animal shelter but team 3, though the judges say they did, did not redeem themselves at all in their challenge of making over random people in the streets of New York. They just seemed more concerned about making over as much people as they could instead of finding out what the people wanted and would be comfy in looking like. In fairness to them the good deed assigned to the team was of a shallower nature than the ones assigned to the two other teams.

After the True Beauty reveal Tyra of course invited Julia to go on her show again (Tyra along with Ashton Kutcher are executive producers of the show). Julia was a delighted to find out that she had not only won the $100,000 pot money and the spot on People Magazine’s Most Beautiful People issue but also a gig in the Tyra Show as a correspondent. Now if money, a magazine pic, and a new job isn’t enough incentive to be as nice a person as possible (at least in front of the cameras) then you’re either really shallow or plain dumb.