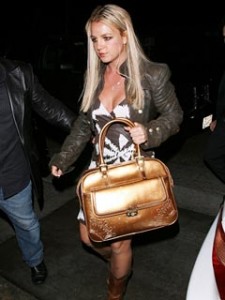 The reality show Rock the Cradle was full of happy surprises. Kenny Loggins’s son, Crosby, won (“My ulitmate goal was to come in second!” he said. And then Britney Spears made a guest appearance.

No she was not there to personally witness Blaze Snider (Dee’s son) sing his version of her hit “…Baby One More Time.” She was supporting her manager Larry Rudolph, who is on the show’s panel of judges.