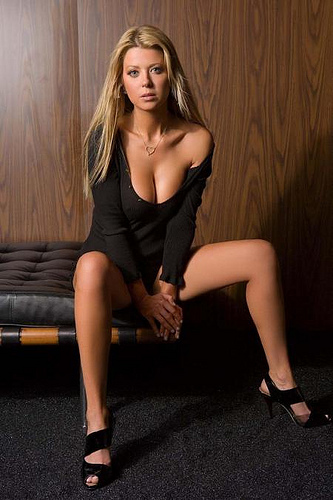 Tara Reid was once America’s sweet heart, from when she starred in American Pie a decade ago. The film was a huge success and various sequels have been made since the original, turning the film into an extremely successful worldwide franchise.

Born in 1975, Tara was raised in New Jersey by her parents who were teachers. As with many actors and actresses, her career started in commercials where she starred in over 100, for McDonalds, Crayola and sunglasses for kids. There has also been starring roles in films such as Van Wilder, alongside Ryan Reynolds and with Ashton Kutcher in My Boss’s Daughter.

Tara was confirmed to be an entrant in the newly launched Big Brother in the UK a few weeks before the show aired, but it was questioned as she recently became engaged to Bulgarian Zachary Kehayov and subsequently married on the same day. This led to sceptics claiming she wouldn’t enter the show as it was more likely for her to abandon her plans for a last minute honeymoon or some time with her new husband.

Although this was the popular belief, she honoured her commitment to go into the Big Brother House and survived until just before the finalists were announced. She was starved from her new husband but was awarded a phone call to him from another housemate who wanted to give her a treat.

It must have been hard for Tara to be that long without her new husband, especially so soon after the marriage and to be surrounded by temptation in the house in the form of model Bobby and TV stay Lucien. She behaved herself though and although had moments of plotting against certain housemates; she generally set a good impression to the British public which lead to a revitalised career if that is what she wants to do.

Tara is a glamorous woman and is often seen wearing designer clothes, jewellery, sunglasses and handbags. Her style icon status was questionable after a slow stint in her career, but now that could also change if she plays her cards right and gets some good exposure from this series. Tara is now home safely to spend some quality time with her husband, where she was seen leaving with him for a night in London recently. She was leaving the May Fair Hotel, wearing a lovely pink dress, some attractive Prada Sunglasses and a huge smile on her face. Maybe this was because she was in love, maybe because she is now hopeful about the future of her career and her new love for the British public.

Francesca is a fashion and celebrity culture writer. She loves TV and movie stars, especially the fashion side, where Tara was recently spotted in Prada Sunglasses that she really wants.