You are here: Home / Networks / NBC / The Voice vs. X Factor: Which Show is Going to be a Hit?

The battle is on between two top rating reality singing shows as they start their new season. The Voice debuts today while the X Factor will premiere on Wednesday. 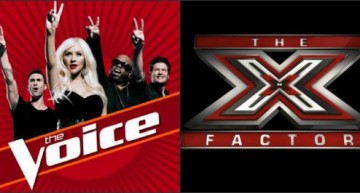 NBC is pitting these two popular TV shows against each other in a bid to increase viewership. And what can fans expect from the new season? New twists in the shows, as revealed by Mark Burnett, the executive producer.

For The Voice, the battle rounds among the singers will have a new format. In this new season, a coach is given the chance to steal a losing contestant who has been sent home. In addition, the losing contestant can choose to change his coach but only if more than one coach hits the red buzzer.

There’s also the knockout round wherein each coach will choose only five singers from their team who will then proceed to the live shows. Coaches for The Voice are Christina Aguilera, Adam Levine, Cee Lo Green and Blake Shelton and host is Carson Daly.

The X Factor, on the other hand, will add Britney Spears and Demil Levato to its panel of judges. As such, Aguilera and Spears will again be pitted against each other. But the two who started out in the Mickey Mouse Club are not taking it personal. Aguilera admits their paths will always cross even moving forward.

In terms of viewership, you be the judge is these new surprises in the shows will be effective in attracting more viewers. The second season of The Voice gained some 14 million viewers while the X Factor recorded 12 million people in its first season.