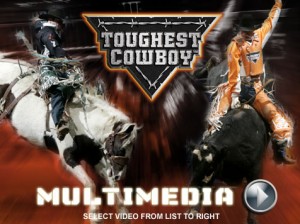 And you thought that you’ve seen it all when it comes to reality TV. Nope, you can’t be more wrong! As long as there is something going on in real life (and there always will be), TV producers will find a way of televising that. The general public’s hunger for reality TV will make sure of that.

The newest reality TV show to hit the waves is called Toughest Cowboy. It does not take a rocket scientist to figure out that this reality TV series will be featuring real life cowboys. With Mark Burnett at the helm, I am pretty sure that this show will make big waves in the year that is to come.

The World’s Toughest RodeoTM kicks off its 2009 National Tour in Raleigh on January 3 at the RBC Center, and world-renowned entertainment producer Mark Burnett will have his crew on hand filming the daring competition for his latest television series “Toughest CowboyTM.”

Toughest Cowboy, the new revolutionary sports-drama based on the lives and rides of twelve cowboys premieres January 29 on Spike TV. These rodeo tri-athletes especially chosen for their grit and guts compete in eight episodes in a national tour that takes them from Raleigh to Chicago. Each rodeo show will be filmed and aired on Spike at 11:00pm EST with the premier on Thursday, January 29 for audiences across the country.

Fearless cowboys will ride in three dangerous events each night-bareback riding, saddle bronc riding and bull riding-an unprecedented test of endurance in modern rodeo competition. In reality-show style, one competitor will be pulled each week in a sudden elimination bull ride match, with the ultimate Toughest Cowboy champion winning the deed to a Rocky Mountain ranch near Laramie, WY.

For someone such as me who has always been attracted to the lives of cowboys, this is something to look forward to!