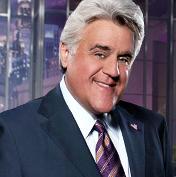 Jay Leno will be returning to the Tonight Show slot next week. Come Monday the verdict on how people will react to the “re-toss up” of NBC’s late night lineup will known.

Leno is obviously trying to stack things up in his favor by getting big stars with lots of drawing power as guests for the entire month of March. On March 1 fisrt up will be Jamie Foxx, Lindsey Vonn (Winter Olympics gold medal skier)and Brad Paisley. The rest of the month will feature equally big (if not bigger) stars or at least equally controversial ones like Morgan Freeman, Meredith Viera, Kristen Stewart, Simon Cowell, Kim Kardashian, Colbie Caillat,Sarah Palin (March 2), and the cast of Jersey Shore (March 3).

Leno is obviously nervous about what will happen especially with the uproar Conan fans made after Leno’s decision to agree to go back. As he said to Oprah the decision was “agonizing” but “Who wouldn’t do that [host the Tonight Show]”? Let’s wait and see if the people will greet him warmly or if he does indeed just have”rose-color glasses” and if things will “fall apart” despite his star-studded gues list.

Let’s hope things work out for him or NBC will once again be faced with the humiliating job of scrambling around trying to fix their botched up lineup.