Fans have been clamoring for the latest installment in the much anticipated zombie survival drama The Walking Dead from AMC since they had left everyone hanging after the midseason finale last December, prompting a higher demand for quality TV through providers such as cable-tv.com.

Recently, AMC through the official The Walking Dead TV blog released a teaser for the upcoming midseason return for the series. The poster featured fan favorite protagonist ex-sheriff Rick “might-actually-be-turning-insane” Grimes in the foreground, shadowed by an ominous, equally grizzled, The Governor – shown with a bloody, grimy, eyepatch. 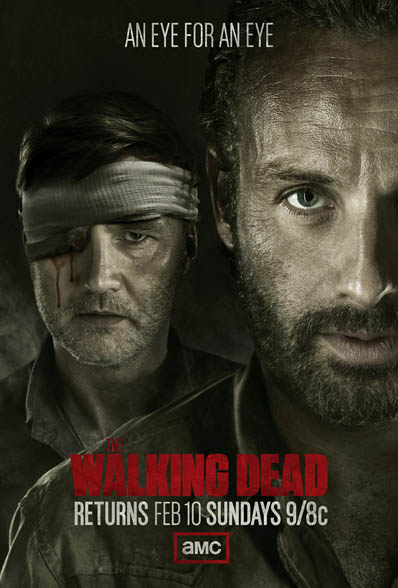 The popular AMC series left the midseason with so many cliffhangers, teasing for a whole new dynamic for the zombie apocalypse survivors in the coming episodes. The bloodshed, for one, came more from humans fighting amongst themselves than from zombie attacks  – particularly with that last episode where Rick’s crew’s rescue mission from within The Governor’s walls ends in a wild wild west shootout in the middle of the streets.

A new group also joins the story. Led by Tyreese (Chad Coleman), the new kids on the block stumble upon the prison where Rick’s group is holed up. Readers of the comic are excited with the addition of Tyreese, as he play a major role in the comics.

It’s also unclear what the outcome of the shootout exactly is, and the recently released poser’s teaser of getting even can definitely swing both ways – what with The Governor pissed off about Rick’s group messing things up in his little walled city, and Rick & Co. out to get even with the abduction of Glenn and Maggie although “an eye for an eye” might also be taken personally what with Michonne taking out The Governor’s eye in their last encounter.

Jay is a huge TV geek and comicbook nerd and it just gives him goosebumps when both his loves come together gracefully.