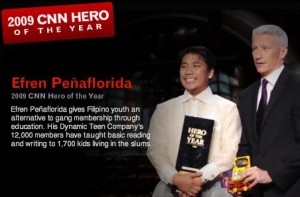 My head is aching a little bit and my eyes are still a bit puffy. If you watched CNN Heroes several hours ago like I did I bet you know exactly why I still have severe side effects from that awards show.

Last year when I saw CNN Heroes it wasn’t planned and just happened to tune in to CNN exactly at the middle of the show during a replay. Needless to say I was hooked. So hooked that one year later I was one of the avid viewers who clicked repeatedly on my hero hoping for a win. My hero didn’t win but I am not at all bitter because Efren Penaflorida, the hero from the Philippines who taught children Saturdays from a pushcart classroom, deserved the win just as much as any of the 10 nominees did.

If you didn’t see CNN Heroes or don’t even know what it is, it is the best awards show right now. What CNN does is it asks people to nominate ordinary people doing extraordinarily heroic things every single day. This year CNN got over 9,000 nominations out of which their blue ribbon panel selected the 10 CNN Heroes of 2009. Each of the 10 I believe deserved the to be Hero of the Year but since there can only be one I can only be happy for Mr Penaflorida and all the children his pushcart classroom will reach because of the $100,000 grant.

There are no words for the emotions and the inspiration one will feel seeing people strive to make a difference get recognition, so just make sure you see the rerun of CNN Heroes.