You are here: Home / TV / Doctor Who comes to home video with extras 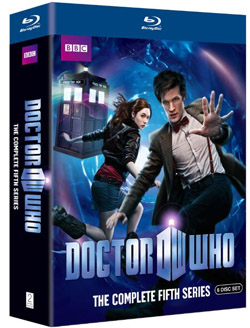 The BBC is soon going to announce that Doctor Who: The Complete Fifth Series (which is what Brits call a season) is on its way this November.

According to the LA Times, Season 5 will drop on November 9th on both DVD and Blu-ray, with two brand new scenes filmed just for the home collection. Written by showrunner Steven Moffat, these new scenes feature stars Matt Smith (the Doctor) and Karen Gillan (Amy Pond) in moments called “Meanwhile, in the TARDIS…” which are set between the episodes proper. Hijinks are almost certain to ensue.

The home video set is also expected to include all 13 episodes of Season 5, along with all of the usual behind-the-scenes features. Given the level of quality this season has maintained — which many thought impossible after David Tennant’s and Russell Davies’ departures — I’d call this set a must-have.