You are here: Home / Hillary Duff Comes to Gossip Girl 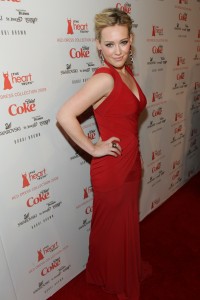 Confession time. One of my guilty pleasures is watching Gossip Girl. I know it isn’t the most cerebral TV show but it sure does get you once you start watching. If you don’t know what I mean then don’t start watching even a single episode unless you want to get hooked. If you’re already hooked, then you obviously know what I mean.

So what brought about my confession? Hillary Duff.

I have never been a Hillary Duff fan and was even turned off with her mouthing off against Faye Dunaway, even if Faye Dunaway kind of deserved it. From where I come from there’s something called respecting your elders.

Anyway Hillary Duff is going to be on Gossip Girl. According to EW, “The actress-designer-pop chanteuse will play Olivia Burke, a movie star who enrolls at NYU in search of a traditional college experience. She ends up rooming with Vanessa (Jessica Szohr) so it’s safe to say she’ll be majoring in Drama!” As for the confession it seems that Duff is a fan of the show and her favorite character is Chuck Bass. I guess we do have something in common. There’s just something about Chuck Bass that makes me watch Gossip Girl. Maybe it’s as Hillary Duff said, “I don’t know why, because he’s so bad and terrible. He is so sad that I feel bad for him.” So come fall we’ll be seeing Hillary Duff aka Olivia Burke but we’ll have to wait and see if her character will be into Chuck Bass as she is or some other guy.