You are here: Home / Networks / AMC / How “The Walking Dead” Changed My Life 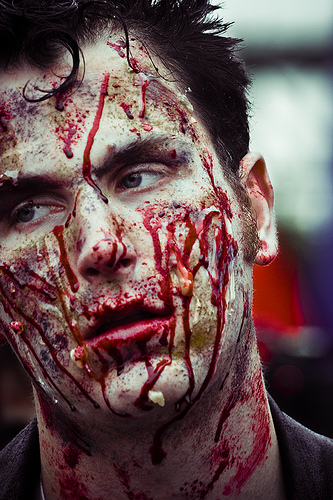 I can’t even begin to explain how baffling the popularity of the hit AMC series, “The Walking Dead” has become.  As an avid viewer and enormous fan of the show, I struggle to find words to explain why the show has gained so much popularity.

Aside from the fact that the show is so unbelievably gory that it is impossible to enjoy popcorn and my favorite soda while I watch, there are dozens of other reasons the show is almost unwatchable, yet anyone who I suggest the show to will watch it with the same intensity as my wife and I.

Hopefully, by me pointing out all of the reasons you shouldn’t watch the show, I will gain some insight of exactly why I can’t stop watching it.  Whatever the conclusion is, I’m sure I’ll keep watching in the end.

I admit that I began watching “The Walking Dead” long before it gained the immense popularity it now has.  The funny part about it was, I only watched about the first five minutes of the first episode before I gave up on it.

The first scene was horribly grotesque, which is usually pretty appealing to me, but when a character named “Shane” entered the scene, things went down faster than a zombie with an impaled head.  His awful accent coupled with an odd fascination for stroking his hair was too much to handle, and I shut it off.

It wasn’t until a friend advised that I watch beyond the opening display of poor acting that I actually watched the first episode.  After that, I was hooked and I can’t explain why, because the acting never got any better!

To be fair, the acting did actually get better when Jeffrey Demunn, an actor with some actual credentials arrived on scene.  But, it wasn’t long before writers threw him to the zombies like a beef steak to a St. Bernard, but I still kept watching!

So, if I were to ask you what could possibly happen if a group of 10-20 people were thrown into a world filled with zombies ready to gobble you up quicker than slop in a pig trough, what would you say?  If your thoughts revolve around the words “kill” or “die” you are correct.

The funny thing about being a Walking Dead fan is I sit down before each episode and actually ask myself what could happen next.  Walking Dead producers have yet to disappoint.

Here is a brief synopsis of every episode: Zombies walk around looking for anything with a pulse to devour, while humans use guns and crude weaponry to turn zombies into fertilizer, that about sums it up.

Granted, there are some plot twists, like killing off the only actor capable doing what his title implies, but outside of fairly basic story lines, there isn’t much to it.  But, I still love it!

The only conclusion that I have regarding why I love “The Walking Dead” so much, is because the special effects and make-up artists make the show disturbingly realistic.  I have woken many times during the night with images of those decomposing flesh-eaters in my mind.  They are truly horrifying.

Also, I believe that the filming and acting is so bad that it gives it a gritty, unfinished look that is only akin to the most classic horror flicks.  It is so unappealing visually, that you can’t take your eyes off of it.  I know; it doesn’t make sense to me either.

Preparing for a Pending Apocalypse

As I discuss the most recent episodes of “The Walking Dead”, a funny thing happens.  The conversation inevitably turns to what would happen in the unlikely, no, completely impossible event of a zombie apocalypse?  This usually turns to comparisons of gun caches and weapons, and eventually leads to imagined plans of how to handle a pending zombie invasion.

I’m not sure if writers of “The Walking Dead” planned on their gory little program growing to the scale it has, but this fan certainly hopes that nothing will change.  The unfamiliar faces, coupled with lackluster filming in a drab environment provide perfect imagery for the most intense, unendurably suspenseful zombie story ever put on film.

Bart Vale writes for businesses that can provide many of your apocalyptic needs, like: home generators, scrap metal, and gun safes.  Much of his writing reflects his personal experiences, which he hopes readers will find humorous and helpful.