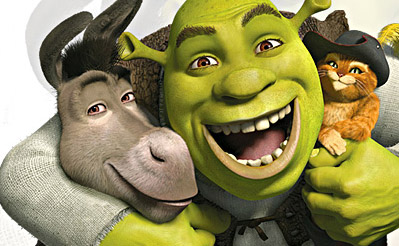 Holiday season is nearly upon us, and NBC and DreamWorks are planning a pair of brand new half-hour animated specials to commemorate Halloween and Christmas.

Scared Shrekless, scheduled for October 28th, finds Shrek challenging his friends Donkey, Puss in Boots, his wife Fiona, and the franchise’s other fairy tale characters to spend the night in the former Lord Farquaad’s haunted castle. It’s planned to be paired with a rerun of last year’s Monsters vs. Aliens: Mutant Pumpkins From Outer Space.

Kung Fu Panda Holiday Special, airing November 24th, features panda bear Po having to choose between his family and his duties as Dragon Warrior when he’s asked to host a winter feast at the Jade Palace. It will be paired with a rerun of last year’s Merry Madagascar.