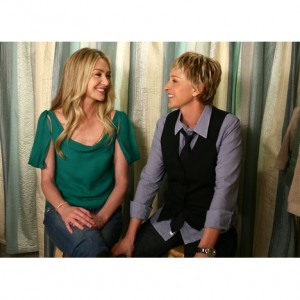 Who watched yesterday’s episode of Ellen? I sure did!

I’ve been waiting for Portia de Rossi to come on the show all week last week more than I was waiting for the end of Hawaiian week. Understandable since I wasn’t going to Ellen and win the trip to Hawaii anyway.

So what did I learn about Portia?

1. She’s shorter than Ellen but wears really high heels, which is why I am one of the people who always though it was the other way around. Good work Ellen you did accomplish one of your goals – setting the record straight on who is taller.
2. She’s a little sloppy, at least compared to Ellen who is apparently very neat.
3. She’s and Ellen are not pregnant.
4. She’s going to be the scary boss on the office comedy show “Better Off Ted” which premieres tomorrow at 8:30PM E.T on ABC.
5. She likes roles like Veronica (her role on Better Off Ted) because in person she’s a people-pleaser and gets to be bad through her roles.
6. She does a good duet with Ellen, but then again we all sound good in the bathroom.

All in all the episode with Portia was fun but it wasn’t as fun as I expected.

Aside from Portia’s first appearance of Ellen they have also been in the news recently for the possible invalidation of their marriage. The reason as we all know is the Proposition 8 rule that outlaws gay unions. Ellen and Portia’s marriage is not the only one in question because California judges are given only about 3 months to decide whether to nullify the 18,000 same-sex marriages that took place before the Proposition 8 rule was voted in place last November.