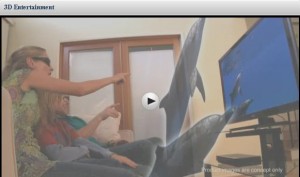 I just saw Avatar yesterday and I think that I’ll be seeing it again sometime this week. I need to take my dad with me because I promised to take him with me the next time I saw a good 3D movie. This means a wallet that looks like it’s been on a diet till the next paycheck. But hey, It’s almost Christmas and Avatar is reaaaalllyyy good that I actually don’t mind seeing it a second time (and maybe even third or fourth!).

Anyway, I find myself getting realy into the 3D experience. I remember when we saw Beowulf and my dad said he couldn’t wait till the characters appeared more realistic. So I’m taking him to see Avatar. We also daydreamed a bit about having 3D TVs but agreed that it’ll probably at least a decade more before we see that becoming reality. So I’m really glad to be proved wrong this time.

Sony announced that it had been accelerating its efforts to allow us to watch 3D movies and play 3D games in our homes. In fact, they’re dead set on getting things done by next year – 2010. In their press release last September Sony said that they’ll be developing 3D compatible Bravia LCD TVs. In additiona to this they “will also develop 3D compatibility into many more of its devices, such as Blu-ray Disc products, VAIO and PlayStation®3, to provide a multitude of ways in which 3D content – from 3D movies to stereoscopic 3D games – can be enjoyed in the home.”

Oh yeah! Now that leaves us with only one problem. When will they make TV shows in 3D? Or will they ever find that feasible? Hopefully with 3D TVs they will be!