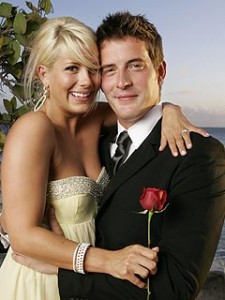 At the end of “The Bachelor” Matt Grant proposed to Shayne Lamas, and it seemed like a happy ending (as reality shows go). But then the scandal broke. She surprised him — and the nation — by appearing in a rather revealing photo spread in Girls Gone Wild magazine.

Guess this falls under the “for better or for worse” clause, and Matt is willing to give the relationship a shot. He event went to her defense: “As we English say, I really feel it was ‘a storm in a teacup. I believe it was blown out of all proportion. I stand by Shayne 110 percent.”