You are here: Home / TV / TV Still a Top Pastime for Americans

With the entry of the internet, it’s true that a growing number of people have preferred to spend their spare time in front of the computer. Whether it’s watching news, their favorite TV shows, videos and films, more folks now find it better to be doing it on their PCs. But despite this, watching TV remains the top pastime for Americans. 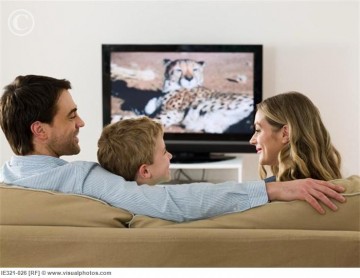 These facts are supported by official survey findings. Nielsen’s 2011 survey results as published on the Media Literacy Clearinghouse site showed that children aged 0-8 years old spend an average of one hour and 44 minutes in front of the television on a typical day. Among 0-1 year olds, the time spent watching TV is twice as much as the time spent on reading or being read to. Also, 42 percent of these kids up to 8 years old have a television in their bedroom.

An analysis of Television Bureau of Advertising, meanwhile, reported that women normally comprise majority of those who spend most of their time watching TV. They spend more than five hours a day in front of the tube in recent years. Following the women are the men who spend more than 4.5 hours daily on TV viewing. The same level of viewing was found for both children and teens.

The same research showed that during an 11-year period from 1988 to 2009, the number of women and men watching TV has gone up significantly.
A 2011 Nielsen report also revealed that based on total day time TV use, the whites top the list. They are followed by the Hispanics, the African-Americans and then the Asians.

Another 2011 research entitled TV & Video Consumer Trend Report revealed that between the regular broadcast and streamed, the number of people watching scheduled broadcast TV has slightly gone down as more prefer watching streamed on-demand TV online. Of those who prefer the streamed TV, more than 44 percent claimed watching internet-based on-demand TV more than once every week.