You are here: Home / “Weeds” Marathon 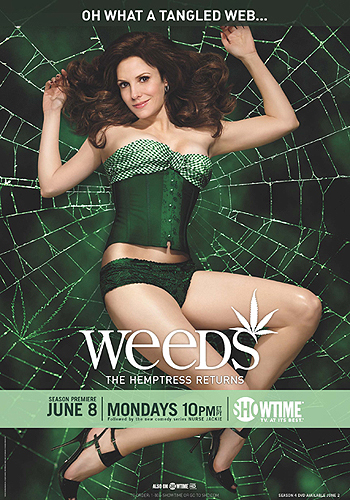 Holidays are great for watching reruns. Today we’re having a “Weeds” marathon. We’re still on Season 1 and I’m wondering how many seasons we’ll finish this weekend.

Though I still like “Weeds” I do have to say that Season 1 is still the best season to watch over and over again. Of course that is just me but I do like its lighter tone. I guess I will be having the theme song playing endlessly in my head for the next few weeks. After several episodes all I can say is that I am so glad that Weeds will be back for yet another season (Season 6) next year. Hopefully it won’t be the last.

For those who don’t watch “Weeds” the series in a nutshell centers about the life of widow Nancy Botwin (Mary-Louise Parker) and her family. Nancy lives with her kids in an affluent suburb neighborhood and for all appearances seems to be an ordinary single-mom struggling to make ends meet. Of course what makes the whole show totally quirkily interesting is that she sells marijuana (bakes them and sells her goodies) to make a living.

My “summary” doesn’t do it any justice so if you don’t believe me that it’s a must-watch show then just believe the awards show because it been consistently nominated since 2005 and has even won several some of them.

As for me its time to stop writing because “Weeds” marathon break is over and the next episode is about to start.