Season 5 of Downton Abbey premiered on British TV on Sunday, September 21. US viewers will most likely have to wait until the New Year for the new season. In the meantime, what can viewers expect? Read on to find out more. 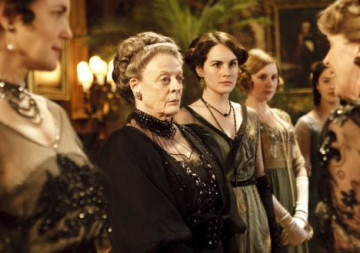 Season 5 promises new characters and dramatic storylines. The first episode opens with a bang – a fire, Carson being asked to be the chair of the memorial committee over Lord Grantham, the re-appearance of teacher Sarah Bunting and the Dowager Countess trying to stop cousin Isobel’s future romantic prospects.

Season 5 also brings Lady Mary in a love triangle with Lord Blake and Lord Gillingham. Speaking of romance, the end of season 4 saw Carson and Mrs Hughes holding hands. Is there a budding relationship in season 5?

Elsewhere, there’s more turmoil for Lady Edith when she becomes closer to the Drewe family – the adoptive parents of her illegitimate daughter Marigold. Lady Rose helps Russian refugees and Anna and Bates are coping with the aftermath of Anna’s rape by Green. Add that to the suspicious death of Green and Bates’ possible participation and you have the recipe for real drama.

Well, the running theme this season appears to be secrets. No-one can understand why Lady Edith is behaving in the way she is, Thomas is trying to manipulate Baxter who has her own dark secret and we may gain an insight into the Dowager Countess’ past when the Russians come to stay.