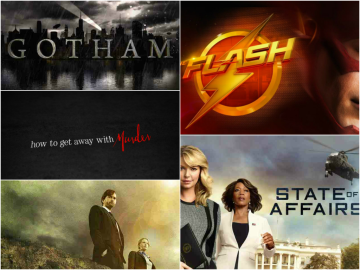 There are many new TV shows to get excited about this fall. If you’re keen to know the ins and outs of some of the must have shows this year, then here’s a rundown on the ones to keep an eye out for.

Starring Ben McKenzie, formerly of the O.C, Gotham is considered a prequel to Batman and focuses on detective James Gordon (McKenzie) tackling city crime, whilst becoming a mentor to a young Bruce Wayne. Co-starring Jada Pinkett Smith as the villain Fish Mooney and obstacles, such as Catwoman (Camren Bicondova) and Poison Ivy (Clare Foley), Gotham promises to be one to watch.

From the creators of ‘Arrow’ comes The Flash, a show based on the DC Comics character of the same name. Flash/Barry Allen played by Grant Gustin, gets struck by lightning and becomes a superhero. It’s the usual fighting bad guys and saving the ordinary folk but with a mix of humour and sci-fi, it may just be a hit for the CW.

State of Affairs sees the return of Katherine Heigl to television. Heigl plays CIA analyst Charleston Tucker, an advisor to the first female black president (played by Alfre Woodard).  The show has already lost its executive producer after just two months, however it’s still on track to debut in November.

How to Get Away With Murder

Starring Academy Award nominee Viola Davis, this legal drama sees law professor Annalise Keating (Davis) becoming involved in a murder scandal involving one of her students. This show from Shonda Rhimes promises to be hotter than Scandal and has already got under the skin of the critics.

The US remake of British show Broadchurch stars David Tennant from the original, alongside Anna Gunn. This crime series follows familiarities of the original series, though it’s said that Fox have altered the ending. The original Broadchurch was a massive hit in the UK but remakes are not always successful. However, Gracepoint is definitely one to consider watching this fall.