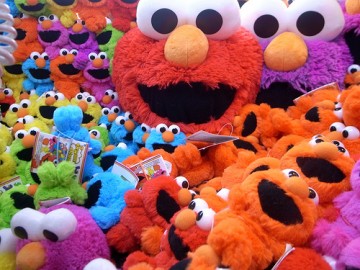 Every parent can agree that they don’t want their kids watching crap TV. Well, the good parents anyway (or the mean parents, depending on what age group you ask). A three year National Television Study conducted by the American Academy of Pediatrics showed that certain cartoons average about twenty violent acts per hour. By the age of eighteen, youngsters will have seen 16,000 simulated murders and 200,000 violent acts on television. It doesn’t exactly make you all warm and fuzzy inside, does it? The statistic is frightening because “many younger children cannot discriminate between what they see and what is real,” says the AAP. Guess that means no more Elmer Fudd blowing Daffy Duck’s head off. But don’t throw your TV out the window just yet; there are actually quite a number of television shows that can benefit your child and that don’t sneak in any violent undertones. Let’s check them out, and uh, you can put that hammer down now.

1. Sesame Street: We had to start the list out with a classic; who doesn’t love Big Bird? The show was born in 1966, when television producer Joan Ganz Cooney and Lloyd Morrisett (vice president of the Carnegie Foundation) decided to create a kid’s show that would “master the addictive qualities of television and do something good with them.” Sesame Street provides children with real life tools like how to get ready for school, integrate values, and learn colors, shapes, letters, and other basic preschool skills. The show makes learning fun by using lively and interesting puppets and by also providing celebrity guest appearances.

2. Dora the Explorer: Dora the Explorer focuses on the main character (Dora) and her educational adventures with her animal friends. The show aims to include children, as Dora, an adorable seven-year old Latina heroine, asks the audience for help solving various riddles and puzzles involving colors, shapes, numbers, and much more. Once Dora has waited an allotted time for her audience to shout the answer at the TV, an arrow on the show clicks on the correct answer. She also sometimes shouts out words in Spanish and asks the audience to repeat them back or help her sing a song with the words strung together.

3. The Backyardigans: A Canadian/American animated series, The Backyardigans revolves around five animal children, who transform their backyard into an adventure land, through good old imagination of course. The show is meant to teach children to be creative and that it doesn’t matter what you are, but who you are. Their adventures include trips to the heart of the jungle, to the beach where they surf, to being transformed into ghosts where no one can see them, to cruising around the world in their sports car, and so much more. Each half hour segment bursts with inspiration as a different musical theme such as jazz, polka, or rock is also played throughout their adventure that day.

4. Mickey Mouse Clubhouse: Who wouldn’t want to have fun with Mickey and Minnie- while still learning something? This lively series can be found on the Disney Channel and is meant to get kids to interact by solving stimulating challenges that are built around an individual theme. The world’s most beloved characters, including Daisy, Donald, Goofy, Pluto, and of course Mickey and Minnie, work together to make kids have so much fun that they don’t even realize that they’re actually learning something beneficial. Eye-popping 3-D animation brings the characters to life even more to add that extra wow factor that kids are looking for.

5. The Magic School Bus: Looking to be transported to a different part of the world for a day? The Magic School Bus can do that. The show features a schoolteacher named Ms. Frizzle who owns a magic school bus, which transports her class to various parts of the world. Their trips are mostly science-related, as they often take trips to locations like the solar system, the past, the human body, straight into a cloud, and to study dinosaurs’ bones and teeth (career in archeology or dental assistant, anyone?). Scientific facts accompany the hilarious antics of the class pet, a lizard named Liz.

Kristy Collins is a graduate from a local college with a degree in English. Her passions include writing, photography, and traveling.